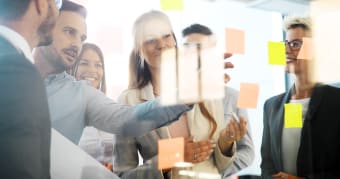 It is a common practice to develop team norms when working with teams.  However, I have discovered that while many teams do this or have done it in the past, it is often poorly done and executed.

The way you behave as a team is governed by a set of unwritten rules and behaviours which make up your team culture. Formally defining these behaviours as team norms has been shown to influence trust, accountability and responsibility in the team.

These written norms can be anything from how a team communicates, meeting etiquette, how you socialize as a team or how decisions are made.  Most often, teams define which behaviours are important to that team and capture them in a shortlist.

How To Embed Your Team Norms In Day To Day Practice?

Have you ever invested time in developing norms only to end up with a load of dusty post-it notes and a photo of a flipchart or whiteboard buried deep in your iPhone gallery? Here are some tips to avoid that.

A 'Systems Approach' to Organizational Effectiveness

Organizations thrive or fail based on their ability to effectively use people, processes and technology to develop the performance and capabilities of their organization and deliver value.

The Importance of Trust in Leadership

Trust is the cornerstone of effective relationships. The job of leaders is to extend trust first. But not everyone does that. Learn how important trust is in leadership.

Results That Speak For Themselves

We've been fortunate to work with organizations committed to individual, team and organization effectiveness. Read Results »